STRI was honoured to be selected by The Jockey Club of Saudi Arabia – on behalf of his Excellency Prince Bandar bin Khalid Al Faisal – as principal contractors for the engineering and construction of Saudi Arabia’s first ever turf racetrack. The track was used to host the inaugural Saudi Cup in 2020 and was designed and constructed to a world leading standard, befitting of the prestigious King Abdulaziz racecourse.

The entire end to end design, build and establishment programme for the track had to be undertaken in a record-breaking period of just six months, requiring a large-scale resource input to achieve such a fast turnaround. 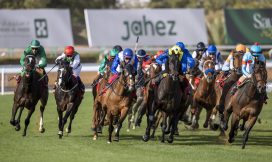 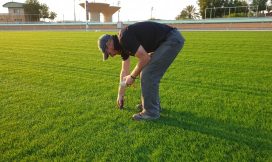 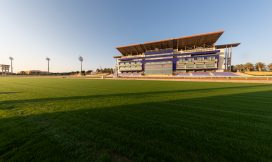 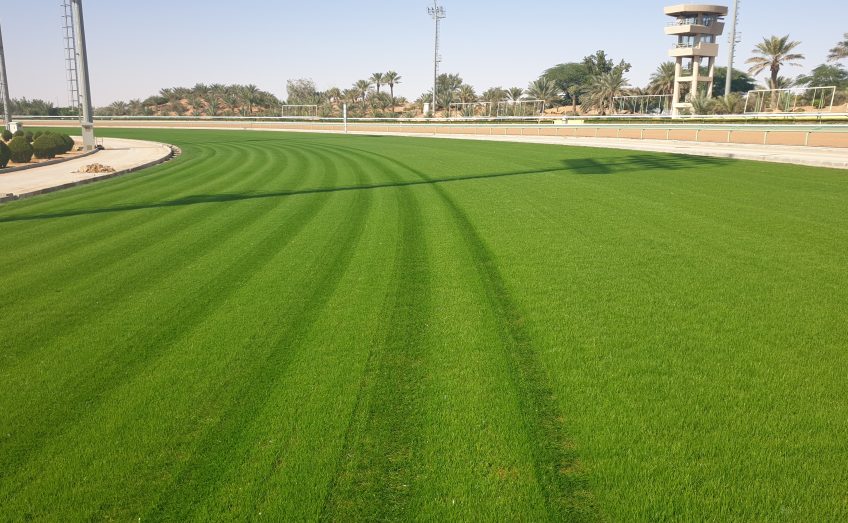 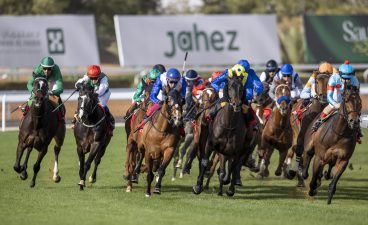 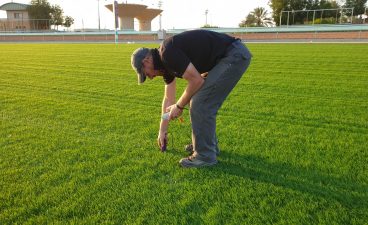 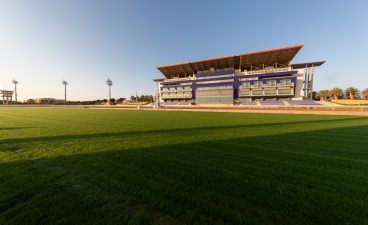 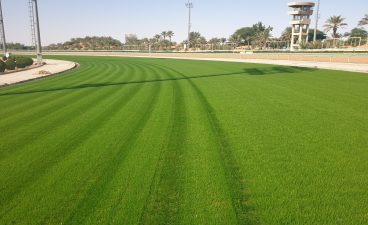 The approach to STRI was initially made in July 2019 for a feasibility report of the site, which would then determine whether it was possible to achieve the goals set out by The Jockey Club of Saudi Arabia, and to identify a solution (considering the climate and lack of resources available in the Saudi Arabian desert). The report concluded that it was that it was possible for the track to be ready in time for the event, despite being just 7 months from the initial approach.

The Jockey Club of Saudi Arabia were delighted with the results of the feasibility report and pursued next steps. Our teams of researchers and consultants quickly established the most effective way of producing a surface that would meet the needs of our client. On ground mobilisation began whilst the track design was ongoing to ensure that the limited time available was used effectively.

Engineering a track of this standard is a complex process, requiring the knowledge of world-leading experts in drainage, irrigation, construction materials and biomechanics. The primary constituents that make up the track are relatively few in number, but the type and amounts of those constituents are critical to making the track a success.

Since the initial design and build of the racetrack, we have managed the annual re-establishment and preparation of the track for each subsequent race season. The track surface is left to burn off every year during the harsh summer, before being restored after the hottest and driest months have passed.  Our project managers step in and work with our chosen constructors to strip the surface and then reseed it. The appetite to increase the racing season resulted in assessing the capabilities of the track around the time of the 2021 Saudi Cup, meaning that the hardiness of the surface would be tested much more than previously, with an equally small window of opportunity to bring the surface to optimal condition due to the conditions and surrounding environment. This continued through 2022 with a further extended turf racing season achieved.

Through our in-house expertise, the feasibility report that was initially conducted provided a detailed study of the site, including a review of the climatic conditions and details on how to mitigate the extreme conditions. Following the feasibility report, The Jockey Club of Saudi Arabia engaged STRI as principal contractor for the project, allowing us to bring efficiencies to all aspects of the project and reduce lead times drastically. We then undertook a rigorous materials selection process, testing a range of sands and gravels from around Saudi Arabia for their compatibility to create a firm surface ideal for racing. Once mixed with stabilising fibres, the rootzone provided the perfect medium within which to install the grass surface.

A rapid construction process then followed and extensive resources were drafted from across the Gulf Cooperation Council to excavate the existing material and install the new track. Timing was critical, and the earth movement work had to be completed at incredible speed to be ready to sow with the selected grass species as soon as temperatures reached the optimal level. To meet the needs of a winter race in Saudi Arabia, the track was established with a “cool season” grass species usually found in more temperate climates. This grass thrives in the winter climate of Saudi Arabia and, when combined with a special blend of stabilising fibres incorporated into the mix, it provides a surface which not only performs exceptionally well but also looks visually stunning.

Once sown, a daily bespoke maintenance schedule was developed by STRI’s technical consultants to ensure that the track’s unique watering and nutrient input regimes were timed perfectly in order to bring the surface up to a world leading standard. Deep rooting was critical to develop a grass surface that not only looked befitting of such a prestigious event, but also held together under the stresses created by a galloping horse.

The track that was initially designed and developed for the 2020 Saudi Cup was comprised of pure ryegrass, however we changed the grass composition to a mixture of ryegrass and smooth-stalked meadow-grass for the 2022 event as this would allow a more rapid establishment of the surface and meet the requirement of the Club to have an extended racing season, with races commencing in early January and running right through to the end of March. This strategy will be amended further for future events as we develop a sustainable strategy for longer-term maintenance of the track to increase capabilities to allow for a further extended racing season in the future.

Frankie Dettori, jockey, Dark Power, said: “What they’ve done in the space of two months (with this turf course) is remarkable”

The track is beautiful. I can’t believe in such a short time they were able to make it; it was a dream to ride on .

Golf Course 2030
The R&A are looking to mitigate the effects of climate change throughout the golf world. Given our long-standing relationship with the R&A, we were entrusted to produce reports highlighting problems around water management including increased restrictions of water use and drainage.

Ilkley Lawn Tennis & Squash Club
STRI was first engaged with Ilkley Tennis Club as part of an ongoing relationship with the Lawn Tennis Association (LTA) following the longstanding provision of consultancy, research and tournament support services to The All England Club.