As Harrogate Town went unbeaten in their first 11 matches of the 2018/19 season, the excitement of a potential long-awaited promotion to League 2 was met with a realisation that there’d be some big changes needed at the club to conform to EFL rules should they achieve it – one of which being that their synthetic home pitch would need to be replaced with a natural turf pitch. As Town marched through their season picking up more points and retaining a strong league position, the club engaged STRI to design a turf pitch that could be installed in the very small window of opportunity after the season ended in May and before the next season began in August. This window of time was made even shorter by the fact that Harrogate finished 6th, meaning that they qualified for the play-offs and that any promotion would be after 3 extra matches. As the play-offs began, STRI and Carrick Sports Construction, who Harrogate Town had chosen to carry out construction of the site, placed staff and machinery on standby to begin immediately. Unfortunately, Harrogate crashed out of the play-offs after a 3-1 defeat at A.F.C Fylde.

The following season, Harrogate managed to take better the previous years’ outcome, securing promotion to League 2 at Wembley Stadium for the first time in the clubs’ 100-year history. The play-off final was played on Sunday 2nd August 2020 and construction began on Tuesday 4th August 2020, in an even shorter window than the one presented to us the previous year due to the regular season being suspended after the outbreak of COVID-19. 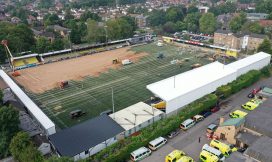 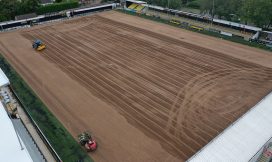 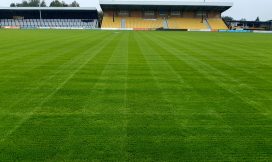 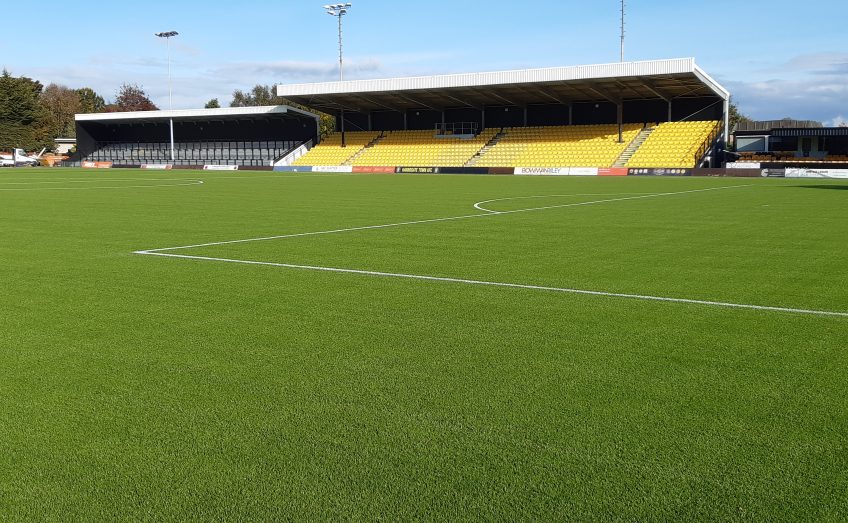 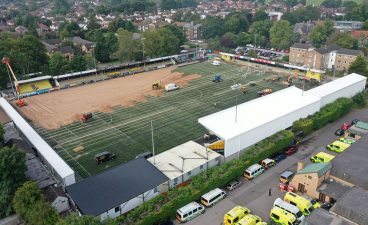 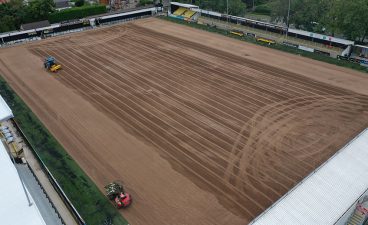 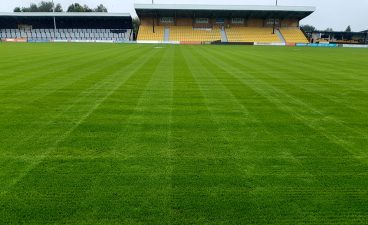 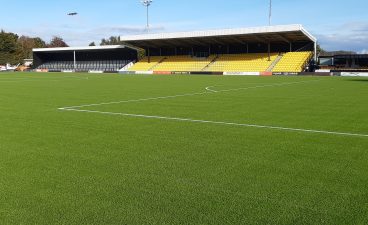 The club had previously enjoyed a very successful business model with the synthetic surface at the nucleus of it, due to decreased wear and tear and damage of the surface compared to a natural turf pitch, the club allowed their first team to train and play on the pitch as well as giving access to their ladies’ team and academy teams. This meant that the club saved costs on sourcing multiple facilities for use at all levels; additionally, it was also a successful revenue stream due to the ability to hire it out to the public without fear of the condition of the pitch being spoiled.

Where sowing usually occurs in June and they have enough time to develop a sufficiently mature turf to be played on in August or September, the natural cycle of grass meant that the natural rate of growth was declining due to the time of year. The further reduced window of time that we had due to the COVID-19 pandemic and need for the turf to grow and develop meant that STRI and Carrick had to follow an incredibly unusual procedure. Whilst we maximised the time that we had by being on call immediately in the event of promotion, it still only left us approximately 1 month before the beginning of the season. As a result of this, Carrick Sports saved 7-10 days by not removing the synthetic pitch and its’ construction profile as would be the usual method, but instead build on top of the existing pitch. The pitch was built up from the synthetic surface with a layer of lower rootzone sand, upper rootzone, an expanded irrigation system, and then seeded. Sections of the original synthetic turf were also retained and re-laid along the outer margins beyond the side lines of the pitch and in front of the dug-outs. To our knowledge, this is the first case of a pitch being designed and constructed in this way in the world.

A further challenge that was present during the project was the location of the site; the stadium is on Wetherby Road, one of the busiest roads in North Yorkshire. This meant that access to the stadium was incredibly difficult given the size of the vehicles that were carrying materials and machinery, and the incredibly narrow entrance to the site meant that there was no room for them to turn once access was obtained. Consequently, staff were needed to stop traffic on Wetherby Road to allow the wagons to reverse into the site.

The design being completed and agreed upon with the client the year prior meant that we had an extra year to amend the design per any change in requirements following further liaison with the client, as well as ample time for the Carrick Sports and STRI staff who would be on site to familiarise themselves with the design to an even more thorough level than usual, reducing the risks of delays and increasing the level of efficiency and time management. Additionally, a team were on standby for the event of promotion with materials provisionally ordered.

Because the synthetic turf was constructed on a free-draining granular stone sub-base, strips were cut out of the surface and filled with gravel prior to rootzone to mitigate any potential future drainage issues in the event of heavy weather. This was in order to ensure that we had a connection between the surface and a very porous stone sub-base.

Fortunately, the owner of Harrogate Town managed to allow more time for the installation by agreeing a temporary groundshare with Doncaster Rovers at the Keepmoat Stadium for the beginning of the season, meaning that the pitch could be seeded on 31st August and allowed a reasonable time to grow before the first home match at the Wetherby Road stadium being held on 17th October 2020.

When the players see that green, perfect grass it lifts them because they know we can play football on it.

World Cup 2022
Aspire Sports Turf, a joint venture between STRI & Aspire Zone Foundation was launched in 2015 to bolster sports turf expertise in Qatar. In the months following the launch, AST were awarded the design, construction supervision and maintenance supervision of all pitches for the 2022 World Cup.

Bruntwood Blue-Green Roof
Bruntwood Works' aim is to make their stylish office buildings as sustainable as possible, both inside and out. Therefore, the blue-green roof was retrofitted onto an existing roof and utilised Polypipe’s Polysync and Permavoid systems.